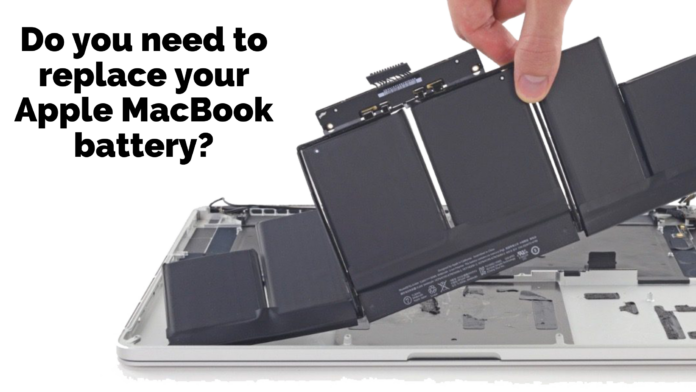 If you need a charger for your laptop all the time and in every room, it’s because it’s not lasting as long as usual and it’s time to consider buying Replacement Apple MacBook Batteries.

Your Apple MacBook may be giving you several signals that you need to change the battery and you may be ignoring them, or procrastinating, so at any moment it may shut down during important work or a video call meeting.

All laptops discharge, it’s normal; and batteries don’t last forever. At any time it will let you know it’s time to replace it, so it’s important that you learn to recognize these signs and do it in time.

It lasts less and less time on

The battery of any electronic device has a lifespan, no matter how much you take care of it. One way to know if you need to replace your Apple MacBook battery is when you start to notice that it lasts less and less time without being plugged in.

You probably remember that when it was new you could go for hours without plugging it in, and today it doesn’t last more than an hour or two. You might even notice that it doesn’t even turn on unless it is plugged in. This will be progressive, so it is recommended that you do not wait until this point.

This is the most obvious way to know that you should replace your Apple MacBook battery. Its system is set up to give you a warning that you need to do so and by clicking on that message on the screen, it will show you the current status of the battery and its version.

It may recommend you to replace it soon, replace it now or repair it. Its technology is advanced enough to warn you and recommend what to do, so since it has warned you in advance, don’t ignore it.

You’ve probably noticed that cell phones and other devices are suddenly very hot to the touch, which means they are overheating. The same goes for laptops and Apple MacBooks are no exception.

If it starts to overheat, it can be both a hardware and software problem, however, many times the battery has something to do with it.

In case you notice that the device is too hot, it may be time to replace the Apple MacBook battery to avoid damaging other components.

Any computer shuts down when it doesn’t have enough battery, but if it shuts down unexpectedly without prompting and after a short time after charging it, it is a very obvious sign that you need to replace the Apple MacBook battery.

This type of device usually shuts down suddenly in cases such as overheating or due to system errors, however, the most common reason is due to battery failure.

Apple always provides support in terms of battery information, full charge capacity, and even voltage. Use these references to monitor the behavior of the battery to make it last longer.

If you must inevitably replace your Apple MacBook battery, then make sure you purchase the battery that is compatible with your device, model, size, and version.

Shot Glass Types You Should Know About

How to Choose the Best Stripper Clothes

Why You Should Invest In Superbox Tv Box

Shandi - November 12, 2021 0
A lot of people take their skin seriously today and have a lot of skincare products. While this is impressive, one of the most...

Shandi - May 18, 2022 0
Nothing makes your bathroom space a fancy place than having a fully-functional and well-situated shower. For instance, a rail shower with overhead makes it easy...

The Best Practices of Using a Pressure Washer

Shandi - December 21, 2021 0
Pressure washers are your best partner in cleaning your home and giving it a sparkling, decorative look. They often give impressive results, giving your surfaces...

How to Store an HD Lace Wig

Shandi - December 20, 2021 0
From inception, hd lace wigs and every new generation didn't start in the wig industry. The wig industry began with regular wigs with little or no...

How Many Bundles do You Need For a Closure

Shandi - December 16, 2021 0
If you’re searching for an add-on to your wigs, then you’ve come to the right place. In this article, we will talk about human...

What are the advantages of wearing a wig?