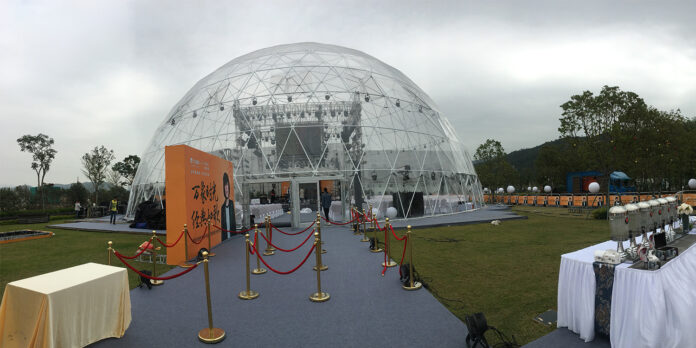 Geodesic dome homes, in simple words, are special structures that are crafted on geodesic polyhedrons. The word geodesic is defined by the experts as the most shortest line ever poss that lies between two points.

The polyhedron is a unique shape in three-dimensional. All the surfaces are flat and they are outward-facing. According to Buckminster Fuller, the geodesic dome tents are unique structures that are meant to solve many housing problems which began to grow when the great WWII came to an end. In the current world, the fascinating charm and fame of geodesic dome tents faded very soon but still there’s a long list of homeowners and builders who are more into building geodesic dome home.

Geodesic dome homes are not very famous now but still a long list of homeowners and builders likes to work on them.

Walther Bauersfeld (worked as Carl Zeis’s) was the one who first came up with the idea of a geodesic dome home. The dome which was the very first one was transformed to be a planetarium.

Buckminster Fuller along with Kenneth Snelson was working in the Black Mountain College on a major architectural project. That was twenty years later. Fuller was the one who discovered and suggested the exciting term “geodesic”. He earned a patent later in the year 1954 for his classic  geodesic dome home work. The work took place at Woods Hole, Massachusetts and revolves around the construction of a still-standing geodesic dome in which Fuller took the assiatance of his pupils. Fuller also earned first prize on behalf of his mega achievement.

Soon the domes by Fuller were a prominent part of industrial and military uses. Soon universities and banks started to order geodesic dome homes in the 1950s.

The geodesic dome home has the ability to face even the strongest winds due to its structure and shape. There is a wide variety of material used in making them ranging from Aircrete.

Most of the Geodesic dome homes rely on steel or timber with architectural polyester, fiberglass, aluminum, or plexiglass as covering. The domes are efficient in a unique manner. They are spherical with loads of advantages.

The geodesic dome home is all about simple and basic structure. You can also create one for yourself. All you need is the right skill, time, technology, and the right material.

Just make sure you have all the permits to make the dome home. You will also need plumbing and electrician help to finish up your geodesic dome home.

In the majority of cases, geodesic home dome owners begin with the basic kit. Next they need to perform physical construction. If you hire a reputable kit-maker, your life will be at ease.

How to Keep Your Pets Hydrated with a Pet Water Fountain

Sylvania LED Bulbs: Seven Important Facts That You Should Know

Shandi - January 23, 2022 0
As the popularity of switching to energy-efficient and environmentally friendly lighting continues in homes and businesses, Sylvania LED (light-emitting diode) bulbs offer those who...

Shandi - May 17, 2022 0
Geodesic dome homes, in simple words, are special structures that are crafted on geodesic polyhedrons. The word geodesic is defined by the experts as...

How to Keep Your Earbuds Clean

Shandi - April 16, 2022 0
There are many options for earbuds you will find on reputable sites like sport-outdo.com. These earbud options are amazing, and they may have you...

Shandi - December 29, 2021 0
What is your favorite accessory – your phone, a pair of earrings, or perhaps a necklace? The latter might be particularly difficult to choose...

How to Effectively Maintain a Good Pressure Washer

Shandi - December 22, 2021 0
You spent a lot of money selecting a good pressure washing machine to sort out your cleaning needs, including vehicle cleaning. Now that the...

How to Keep Your Pets Hydrated with a Pet Water Fountain